Which ethical principle of Hull House residents was more central to their work: their non-judgmental stance, or their embrace of the poor as neighbors?

Our theme of the month for June is “Christian Progressives Respond to Urban Poverty,” emphasizing the work of Jane Addams (1860–1935). Addams co-founded Hull House, a “settlement house” in an industrial neighborhood of Southside Chicago that was densely populated by recent immigrants. There, she and her friends modeled an active engagement in the lives of the poor that anti-poverty activists of later generations have found instructive and inspirational. 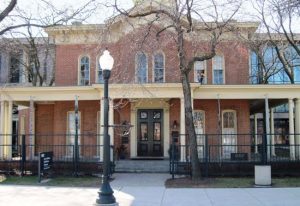 The approach of Adams and other settlement house volunteers is said to have shaped many “best practices” in current social work. Beth Turner of the Austin Riggs Center (a residential treatment center for the mentally ill in Stockbridge, Massachusetts) writes that the settlement house movement gave birth to a client-centered approach to clinical social work that seeks to understand “the person in their environment,” to seek out the client’s strengths, and to empower them to find their own solutions. Turner sees these principles as rooted in the “open and curious stance” of settlement house leaders like Jane Addams, who instead of imposing “a program of moral instruction from above,” simply offered friendship, slowly building the mutual trust that would enable them to ask “What do you need? How can we be helpful?”

One might well ask which was the more important strength of the settlement house movement: its “open and curious stance,” or its willingness to embrace the poor as neighbors? If one asks which aspect of the movement seems more rooted in religious faith and practice, one must conclude it is the neighborliness. It is true that Jane Addams’ generally non-judgmental attitude toward the immigrant poor of Halstead Street accords with an understanding of Christianity that elevates the command, “Judge not, that ye be not judged.” In her essay, “The Subjective Necessity for Social Settlements” Addams insists that the residents of a social settlement “must be emptied of all conceit of opinion and all self-assertion.” However, the end of this openness is that the residents be “ready to arouse and interpret the public opinion of their neighborhood. They must be content to live quietly side by side with their neighbors, until they grow into a sense of relationship and mutual interests.” 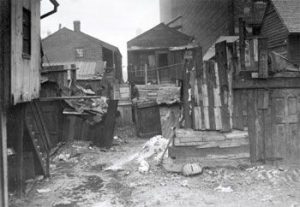 A photo of the alley and tenements behind Hull House in 1910, (Lewis Hine, “Hull-House, Our Backyard” [1910] Jane Addams Memorial Collection, University of Illinois at Chicago).

Addams’ commitment to life in community with the poor is the heart of her active faith. It is this aspect of early Christianity that she points to when speaking of social settlements as a “subjective necessity” for the educated young woman who feels deprived of meaningful work and alienated from that greater part of humanity who perform the labor that sustains her protected existence. Addams wanted to recapture what she called “the wonderful fellowship, the true democracy of the early Church.” Her neighbors accepted her aid because she shared with them not only her home, her table, and her evening pastimes of chamber concerts and book discussions, but also their garbage-filled streets. If Addams were alive today, she might press us to consider whether the open, non-judgmental approach valued by social workers like Turner can succeed when the poor one seeks to help are not neighbors but clients—objects of professional study and practice, instead of fellow citizens dealing with shared neighborhood problems. 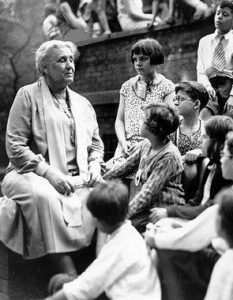 Addams with the children of Hull House

Two scholars who have written recently on emerging class divisions in American society say what is needed is not more professional social work—whether judgmental or not—but more neighborliness. Robert Putnam has written often about the importance of “social capital,” defined in his 2001 study Bowling Alone: the Collapse and Revival of American Community as the “connections among individuals” and the “social networks and the norms of reciprocity and trustworthiness that arise from them.” In that book he also distinguished between “bridging social capital,” which forges connections between groups, and “bonding social capital,” which reinforces the insularity of a group. Putnam’s socially liberal perspective might be said to represent the non-judgmental approach to the problems of the poor; he emphasizes the obstacles the poor face in making connections outside of their social group, and the resulting limitation on their social mobility. By contrast, conservative author Charles Murray, in his 2012 study Coming Apart: The State of White America, 1960-2010, attributes the stalled economic progress of the American underclass to an erosion of virtuous habits in a socio-economic environment that does not reward them.

Yet both authors argue that restoring upward economic mobility to the poor depends on restoring social interactions between them and their more prosperous fellow citizens. Both authors bemoan the loss of community structures that once ensured that the wealthy would interact daily with the poor: public and parochial schools that drew pupils from a range of economic levels, church congregations where the local handyman worshiped together with the mill owner, civic groups that engaged the local policeman and the local doctor in the same projects. While Putnam (see Better Together: Restoring the American Community [2004] and Our Kids: The American Dream in Crisis [2016]), sees people of disparate income levels joining together to solve community problems, Murray sees the prosperous modeling functional behavior to the dysfunctional. Yet both see the need to break down the walls insulating the wealthy gated community so that Americans of all classes can engage with each other.