The assassination of President Abraham Lincoln at Ford’s Theater on April 14, 1865 brought an emotional climax to the painful and protracted national conflict of the Civil War. Lincoln's death at the hands of a Southern sympathizer on Good Friday came to be felt as a sacrificial atonement for the sin of slavery that had caused all the suffering of the Civil War.

The assassination of President Abraham Lincoln at Ford’s Theater on April 14, 1865 brought an emotional climax to the painful and protracted national conflict of the Civil War. At first, however, the assassination suggested that the war had not ended. The Confederates had formally surrendered at Appomattox Court House five days before,  but Lincoln’s killing seemed to many Northerners to signal the inability of the South to admit defeat. 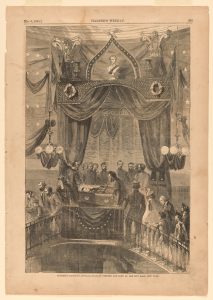 Shot on Good Friday and dying the next morning, Lincoln became the focus of Easter sermons around the nation. Some of those preaching were abolitionists and unionists earlier frustrated by Lincoln’s forgiving attitude toward the South. Now they compared Lincoln’s assassination to the killing of Jesus Christ, who had prayed from the cross on behalf of those who crucified him. The Reverend Amory Dwight Mayo of Cincinnati, for example, preached that the assassination demonstrated the utter depravity of the slaveholders, who

. . . began by the blasphemy of God in the systematic degradation of his image, man to a brute . . . . Yet . . . we said . . . these gentlemen and gentlewomen are our brothers and sisters, our associates in Church, in State, and society; they are dreadfully wrong, and are now doing wrong to their bondmen, but they will hear the voice of our reason, our science, our religion; they will repent, and at last be reconciled, and at last do justice to their own enslaved, to us, to themselves, and to their country. And so we went on in our sin and our blindness, strengthening their hands, and arming them with new weapons of power, forgiving them faster than they could harm us. . . .

And soon enough they began to shed the blood of our own proud race, and to do to us all the dreadful things they had done to our weaker brother. . . .

Wicked men upon earth always go on unto the last result, and that result is to slay their truest friends, and quench their blind rage in the blood of the noblest who would die to save them.

Some ministers urged that Americans follow Lincoln’s Christlike example of forgiveness, forbearing to blame the South as a whole for the action of one assassin. Yet others called for harsh measures against those who had traitorously seceded and now, they presumed, approved of the assassin’s deed. Mayo declared:

We can live with Lincoln away from the earth. But he was the last man that could have persuaded this American people to try to build anything good out of that pile of rubbish—the slave aristocracy of the South. . . . God seems to have said to us at the end of our rejoicings last Friday night: — All things are possible to your great energy, hope and love, save this one; see what this despotism will do on its way to everlasting perdition; henceforth waste no breath in calling to life what God has doomed to eternal death. 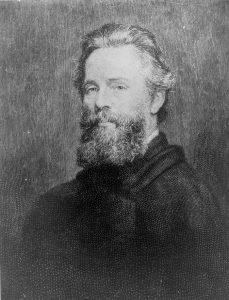 Among the many poetic tributes to Lincoln, Herman Melville’s “The Martyr” notes this rising spirit of vengeance against the South. National mourning over the humble, non-vindictive Lincoln, he warns, will lead to punishing reprisals against the defeated Confederates. The poem begins,

Good Friday was the day

Of the prodigy and crime,

When they killed him in his pity,

When they killed him in his prime

Of clemency and calm—

When with yearning he was filled

And, though conqueror, be kind;

But they killed him in his kindness,

In their madness and their blindness,

And they killed him from behind.

There is sobbing of the strong,

And a pall upon the land;

But the People in their weeping

When they bare the iron hand.

Whether the vengeance Melville predicted ever came is debatable. Some would argue that anger over Lincoln’s assassination propelled Radical Republicans, led by men such as Senator Charles Sumner and Representative Thaddeus Stevens, to impose stricter requirements for readmission of the seceded states into the joint governance of the nation. Others argue this happened because Lincoln was not present to insist on more lenient terms. 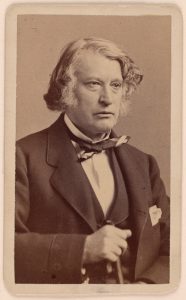 Sumner, who delivered his eulogy of Lincoln on June 1, 1865—a “Day of National Humiliation” proclaimed by Lincoln’s successor Andrew Johnson—hoped to turn praise of Lincoln into protection for the freedmen. He documented in great detail Lincoln’s commitment to human equality. Then he argued that Lincoln’s memory would be best honored by legislation to protect the freedmen’s rights.

Arguably, the long national mourning over Lincoln displaced anger that might have been more productively directed toward securing civil liberties for the freed slaves. The Fourteenth and Fifteenth Amendments were enacted, and Civil rights legislation was passed, but enforcing these laws would have required decades of marshal law in the South. By the time Frederick Douglass delivered his tribute to Lincoln in 1876, Republicans in Congress had wearied of that project. Perhaps Douglass’s disappointment over the nation’s failure to reconstruct race relations in the South influenced his account of Lincoln’s leadership.

The Ambivalence of Some Tributes 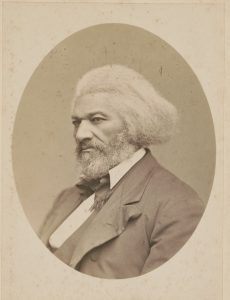 Frederick Douglass, photographed by George Kendall Warren between 1880 and 1890. Library of Congress, LC-DIG-ppmsca-56175.

In the third revision of his autobiography (The Life and Times of Frederick Douglass, 1881) Douglass commented that Lincoln, more than any man he’d ever met, showed no consciousness of social status based on color: “There was no vain pomp and ceremony about him. I was never more quickly or more completely put at ease in the presence of a great man, than in that of Abraham Lincoln.” Yet in his speech at the dedication of the freedmen’s memorial to Lincoln, Douglass called Lincoln “pre-eminently the white man’s president, entirely devoted to the welfare of white men.” He said that the African-Americans who had donated the memorial—who often likened the late President to the “Father Abraham” claimed by the once-enslaved, later liberated Hebrews—were “at best only his step-children; children by adoption, children by forces of circumstances and necessity.” 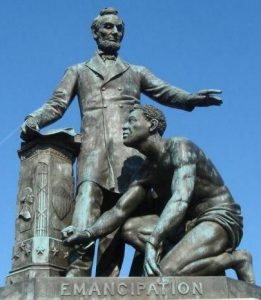 Douglass had met with Lincoln during the war to argue that African American soldiers deserved pay equal to that of whites. He objected to proposals Lincoln and, later, President Grant, had floated to resettle freedman somewhere outside US territory. Perhaps Douglass felt Lincoln’s doubt that former slaves and masters could live peacefully together in a relationship of equality contributed to the failure of Congressional Republicans to enforce civil rights legislation in the South.

Most eulogists, in the immediate aftermath of the assassination, admiringly sketched Lincoln’s character.  A few commented on his shortcomings. Sumner qualified his praise of Lincoln by charging him with tardiness and indecision on emancipation and civil rights for Black Americans. Douglass, arguably, more accurately named Lincoln’s real limitation: political necessity. He explained that, had Lincoln

. . . put the abolition of slavery before the salvation of the Union, he would have inevitably driven from him a powerful class of the American people and rendered resistance to rebellion impossible. Viewed from the genuine abolition ground, Mr. Lincoln seemed tardy, cold, dull, and indifferent; but measuring him by the sentiment of his country, a sentiment he was bound as a statesman to consult, he was swift, zealous, radical, and determined.

Whatever his own feelings about race, Lincoln saw clearly the attitudes of those around him.

Lincoln as his Own Best Memorialist

One who reads through a selection of the eulogies written after Lincoln’s death might well conclude that none capture the man as fully as the speech Lincoln himself delivered on March 4, 1865 to explain the war’s cause and meaning. The Second Inaugural Address states more plainly and succinctly than most historical accounts what the quarrel was all about. Yet, beyond this, it expresses what Lincoln had come to see as his own purpose as war leader.

Lincoln reminded Americans that the war was a dispute over whether or not slavery would be allowed to extend into the new territories. He omitted from this account only one key fact: that his own election—because of his firm opposition to any extension of slavery—ensured slavery’s inevitable end. The South seceded because they believed that Lincoln threatened the precarious balance between slave and free-soil interests. Lincoln, however, took no credit for precipitating a crisis that would end slavery even sooner than the South feared. When he issued the Emancipation Proclamation, he had spoken of it as a war measure; and although he had fought hard for passage of the 13th Amendment, he took no credit for ending slavery once and for all. He did not even directly name  those who pushed the disagreement over the extension of slavery into civil war. “One side would make war rather than let the nation survive, and the other would accept war rather than let it perish,” he said.

Lincoln went on to concisely capture—as he did in so many of his speeches—the injustice of slavery. This time, however, he pointed out that the people who practiced slavery were fellow-Christians. “It may seem strange that any men should dare to ask a just God’s assistance in wringing their bread from the sweat of other men’s faces; but let us judge not that we be not judged.”

Teacher and Savior of the Nation

Then, speaking as representative of the nation as a whole, the president took on responsibility for this, the crime underlying all the war’s suffering:

If we shall suppose that American Slavery is one of those offences which, in the providence of God, must needs come, but which, having continued through His appointed time, He now wills to remove, and that He gives to both North and South, this terrible war, as the woe due to those by whom the offence came, shall we discern therein any departure from those divine attributes which the believers in a Living God always ascribe to Him? Fondly do we hope, fervently do we pray, that this mighty scourge of war may speedily pass away. Yet, if God wills that it continue, until all the wealth piled by the bond-man’s two hundred and fifty years of unrequited toil shall be sunk, and until every drop of blood drawn with the lash, shall be paid by another drawn with the sword, as was said three thousand years ago, so still it must be said “the judgments of the Lord, are true and righteous altogether.”

It is hard to escape the analogy between Lincoln’s death and the sacrificial death at the center of the Christian story Lincoln had so carefully studied in his frequent reading of the Bible. Instead of celebrating victory over the secessionists, he took responsibility for the crime the nation as a whole had committed. Then a resentful secessionist killed him for ending that injustice. Finally, Americans, grieving their own war losses, allowed Lincoln’s death to atone for them.