Resistance to the British government during the prelude to the American Revolution had a decidedly religious element: many in the colonies feared the imposition of religious conformity. 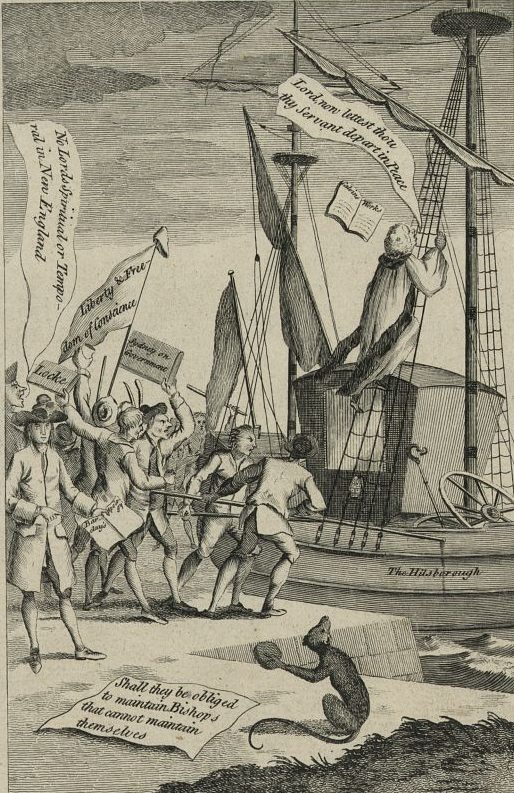 An Attempt to Land a Bishop in America. London, 1768. Engraving, artist unknown. Library of Congress Prints and Photographs Division, LC-DIG-ppmsca-13637.

In this political cartoon, the motivation of the crowd of protesters is “Liberty and Freedom of Conscience.” As they literally push the bishop and his boat away from American shores, the crowd hurls neither rocks nor insults, but “Calvin’s Works,” “Sydney on Government,” “Locke,” and “Barclay’s Works”—and of the four, “Calvin’s Works” is the first to hit the target. Such a selective grouping of authors clearly indicates that the artist had reason to consider Calvin as among the more important defenders of religious freedom.

Jonathan Mayhew, a Congregational minister, was among the most outspoken supporters of the American opposition to British imperial policies such as the Stamp Act. John Adams credited Mayhew’s 1750 sermon A Discourse Concerning Unlimited Submission with reminding the people of the colonies of their liberties.

“It was read by everybody; celebrated by friends, and abused by enemies. ”

In this sermon, delivered to commemorate the hundredth anniversary of the execution of King Charles I, Mayhew denied Charles’ status as a martyr and instead portrayed him as a tyrant, intent on destroying the liberties of the people of Great Britain. Mayhew (writing in what Adams described as terms “seasoned with wit and satire superior to any in Swift or Franklin”) denied that Christians had an obligation to submit to unjust governments; he lauded the leaders of the Parliamentary cause who had opposed Charles for their reasonable act of self-preservation.

Mayhew’s language was stirring: “For a nation thus abused to arise unanimously, and to resist their prince, even to the dethroning him, is not criminal ; but a reasonable way of vindicating their liberties and just rights ; it is making use of the means, and the only means, which God has put into their power, for mutual and self-defence. And it would be highly criminal in them, not to make use of this means.” The sermon was printed “at the request of the hearers” who apparently found Mayhew’s robust endorsement of natural rights and individual liberty worth committing to the more enduring and easily disseminated medium of print.