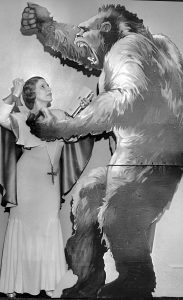 Aimee Semple McPherson Battles the Gorilla of Evolution. McPherson was a famous evangelist with a theatrical flair. This image is indicative of the publicity surrounding the “Monkey Trial” in Dayton. Source: The Oregonian

The Scopes trial raised many issues but illuminated none of them. It was set up by some civic boosters as a publicity stunt to put Dayton, Tennessee on the map, and remains famous primarily for being famous. Although its two chief protagonists—Clarence Darrow and William Jennings Bryan—were, respectively, an accomplished lawyer and a leading politician, their confrontation in the trial resolved nothing, as the transcript reveals.[1] The trial itself has been misrepresented in the play and movie Inherit the Wind, a completely unreliable guide to what happened.

Reasons for the Trial

The trial came about when John Scopes, a teacher in Dayton, agreed to incriminate himself by claiming to have taught from a biology text that discussed evolution. By making this claim he admitted to having broken the Butler law, passed by the Tennessee legislature in March 1925, which forbad the teaching in Tennessee schools of any account of creation other than the one in the Bible. The American Civil Liberties Union (ACLU), founded in 1920, had committed itself to defend anyone accused of violating the Butler act. The ACLU’s interest was in defending the free speech rights of teachers and establishing the principle of academic freedom. (This was apparently Scopes’ principal interest). The ACLU brought in Clarence Darrow, who over time changed the basis of the defense to the claim that there was not a conflict between evolution and the Bible. This was the subject of his famous cross-examination of Bryan, a well-known defender of the literal interpretation of scripture. The point of Darrow’s questioning was to show that Bryan did not in fact read the Bible literally. If not taken literally, the account of creation in Genesis could be interpreted to be compatible with evolution. Bryan gave ground under Darrow’s questioning but in doing so revealed more about the limitations of his own understanding than those of the view he espoused.

Outcome of the Trial 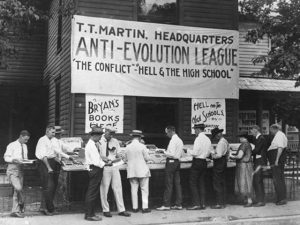 Scopes was found guilty and fined $100. On appeal, the Tennessee Supreme Court upheld the constitutionality of the Butler law, but overturned the verdict on a technicality (involving how the fine was determined). The Court advised that “the bizarre case” not be retried. In 1968, in Epperson v. Arkansas, the U.S. Supreme Court ruled that laws such as the Butler law were unconstitutional because they violated the First Amendment’s establishment clause. Arkansas had adopted (by initiative) a law like the Butler law in 1928, one of a number of states besides Tennessee to do so. 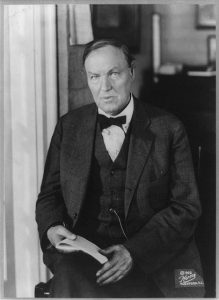 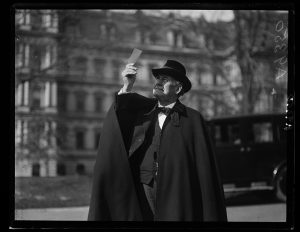 William Jennings Bryan in 1925, photographed as he regards a solar eclipse through a darkened glass. Harris and Ewing Collection, Library of Congress.

Among the many issues raised by the testimony and statements made during the trial are the roles of religion and science in American life; parental versus expert control of school curricula; academic freedom; the tension between rural and urban America; the status of women in the early 20th century; and the modernist-fundamentalist debate in the same period. In one way or another, these issues remain alive in American life and politics. For a clearer understanding of them, however, we should look elsewhere than the Scopes Trial.

[1] A good collection of documents on the trial, including excerpts of the trial transcript, is Jeffrey P. Moran, ed., The Scopes Trial: A Brief History with Documents (Boston: Bedford/St. Martin’s, 2002). This collection also has a useful introduction.