In 1657, a group of English settlers in New Netherland protested the order of the Governor, Peter Stuyvesant, banning all religious practice other than that connected to the Dutch Reformed church. Quaker and Baptist missionaries were of particular concern to Stuyvesant as were the Quakers of those remonstrating against his order. 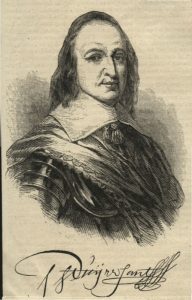 Right Honorable. You have been pleased to send up unto us a certain Prohibition or Command, that wee shoulde not receive or entertaine any of those people called Quakers, because thay are supposed to bee by some seducers of the people; for our parte wee cannot condem them in this case, neither can wee stretch out our hands against them to punish, bannish or persecute them, for out of Christ, God is a consuming fire, and it is a fearful thing to fall into the handes of the liveing God; wee desire therefore in this case not to judge least wee be judged, neither to Condem least wee bee Condemed, but rather let every man stand and fall to his own. Maister wee are bounde by the Law to doe good unto all men, especially to those of the Household of faith; and though for the present wee seeme to bee unsensible of the law and the Lawgiver; yet when death and the Law assault us: if we have [not] our advocate to seeke, who shall plead for us in this case of Conscience betwixt God and our own soules; the powers of this world can neither attack us neither excuse us, for if God justify, who can Condem, and if God Condem, there is none can justifye; and for those Jealowsies and suspitions which some haue of them that they are destructive unto Magistracy and Ministry that cannot bee; for the Magistrate hath the Sword in his hand and the Minister hath the Sword in his hand as witnesse those tow great examples which all Maiestrates and Ministers are to follow M[oses] and Christ; whom God raised up Maintained and defended against all the Enemies both of flesh and spirit, and therefore that which is of God will stand, and that which is of man will [come] to noething: and as the Lord hath taught Moses, or the Civill power, to give an outward libertie in the State by the law written in his heart designed [for] the good of all and can truly judge who is good and who is evill, who is true and who is false, and can pass definitiue sentence of life or [death] against that man which rises up against the fundamental law of the States Generall, soe [he] hath made his Ministers a savor of life unto [life?], and a savor of death unto death. The law of loue, peace and libertie in the states extending to Jews, Turks and Egyptians, as they are considered the sonnes of Adam, which is the glory of the outward State of Holland; so loue, peace and libertie extending to all in Christ Jesus, Condems hatred, warre and bondage; and because our Savior saith it is impossible but that offence will come, but woe be unto him by whom they Commeth, our desire is not to offend one of his little ones in whatsoever forme, name or title hee appreares in, whether Presbyterian, Independent, Baptist or Quaker; 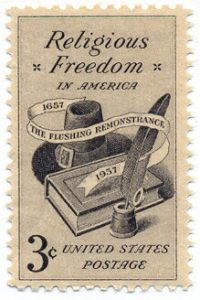 A stamp commemorating religious freedom and the Flushing Remonstrance

but shall be glad to see anything of God in any of them: desireing to doe unto all men as wee desire all men should doe unto us, which is the true law both of Church and State; for our Saviour saith this is the Law and the Prophets; Therefore if any of these said persons come in loue unto us, wee cannot in Conscience lay violent hands upon them, but give them free Egresse into our Towne and howses as God shall perswade our Consciences; and in this we are true subjects both of the Church and State; for wee are bounde by the law of God and man to do good unto all men, and evill to no man; and this is according to the Pattent and Charter of our Towne given unto us in the name of the States Generall which we are not willing to infringe and violate but shall hold to our pattent and shall remaine your Humble Subjects the inhabitants of Vlishing; written the 27th of December in the Yeare 1657