Hudson, Ohio in the Western Reserve was a center of opposition to slavery and a stop on the underground railroad. 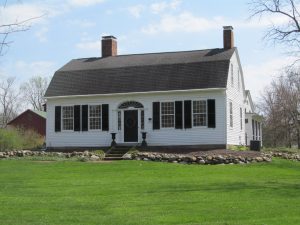 The Elizur Wright House. Wright was a leading abolitionist and a professor at Western Reserve College 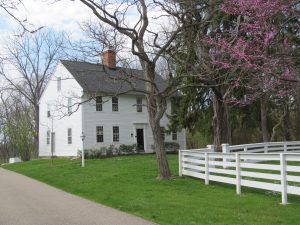 The David Hanson House. Hanson was a proponent of colonization and active in the underground railroad. 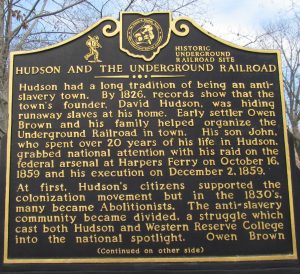 A plaque on the town green commemorating Hudson’s opposition to slavery.

The town of Hudson, Ohio played an important role in the opposition to slavery in antebellum America. It was home to the family of Owen Brown.  His son, John, declared his opposition to slavery in Hudson at a Congregational church in 1837. His last public appearance before heading to Harper’s Ferry in 1859 was in front of the Free Congregational Church of Hudson. Hudson was also an important stop on the Underground Railroad. Numerous houses in the town were hiding places for escaped slaves headed to Canada. 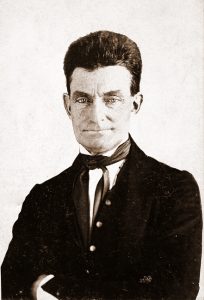 John Brown in 1840. Library of Congress

Hudson was settled in 1799 by people from Connecticut. (The Brown family was from Torrington; John was born there in 1800.) The area of Ohio in which Hudson is located was known as the Western Reserve because the charter of the state of Connecticut gave it a claim to lands on the same latitude stretching to the Pacific. As did other states, Connecticut gave up these western lands in exchange for the assumption by the Federal government of its revolutionary war debt. It retained an area in the northeastern part of what is now the state of Ohio, south of Lake Erie. This area became known as the Western Reserve. Connecticut sold land in the Reserve, not giving up its claim entirely until 1800, three years before Ohio became a state. 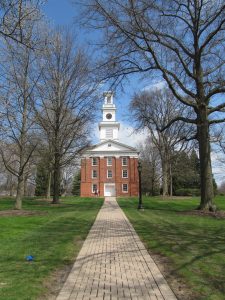 One of the original buildings of Western Reserve College

The settlers who came to the Reserve from Connecticut brought their religion and town plans (a central green with a church). Part of the religious heritage brought to the Reserve was opposition to slavery. This did not mean that all residents of Hudson shared the same views about slavery or how it should be dealt with. In the 1830s, the town was split by a debate between those who thought the freed slaves should be returned to Africa and those who thought they should remain in America and become citizens. 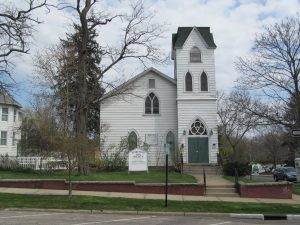 The controversy over slavery eventually led Owen Brown to leave the Congregational church in Hudson and establish there the Free Congregational Church, which required members to swear to fight against slavery. Several years earlier, this argument had caused Brown, a trustee of Western Reserve College (established in Hudson in 1826), to resign his trusteeship and become a trustee of Oberlin College (founded in 1833). Brown and others (including visiting debaters from Lane Theological Seminary) persuaded Oberlin to admit black students, as well as women.