As the pastor of the Salzburger (German) Lutheran congregation of Ebenezer, GA, John Earnst Bergman presented this letter to President Washington during his 1791 tour of the southern states.

Bergman’s letter welcoming Washington to the Savannah area is, in many ways, typical of the many addresses the president received from religious congregations during his national tour. He praises Washington’s virtue and wisdom, but, unusually, he composes his message in Latin. Bergman could not have been understood by Washington had he written in his own language, nor did he possess the facility with English to convey his sentiments appropriately. Instead, he chose to use the lingua franca of the educated classes of whatever national or ethnic background to express his profound appreciation for the religious liberty his community had experienced in America. In this, Bergman’s letter stands as a material testament to the emerging religious plurality of the new nation. 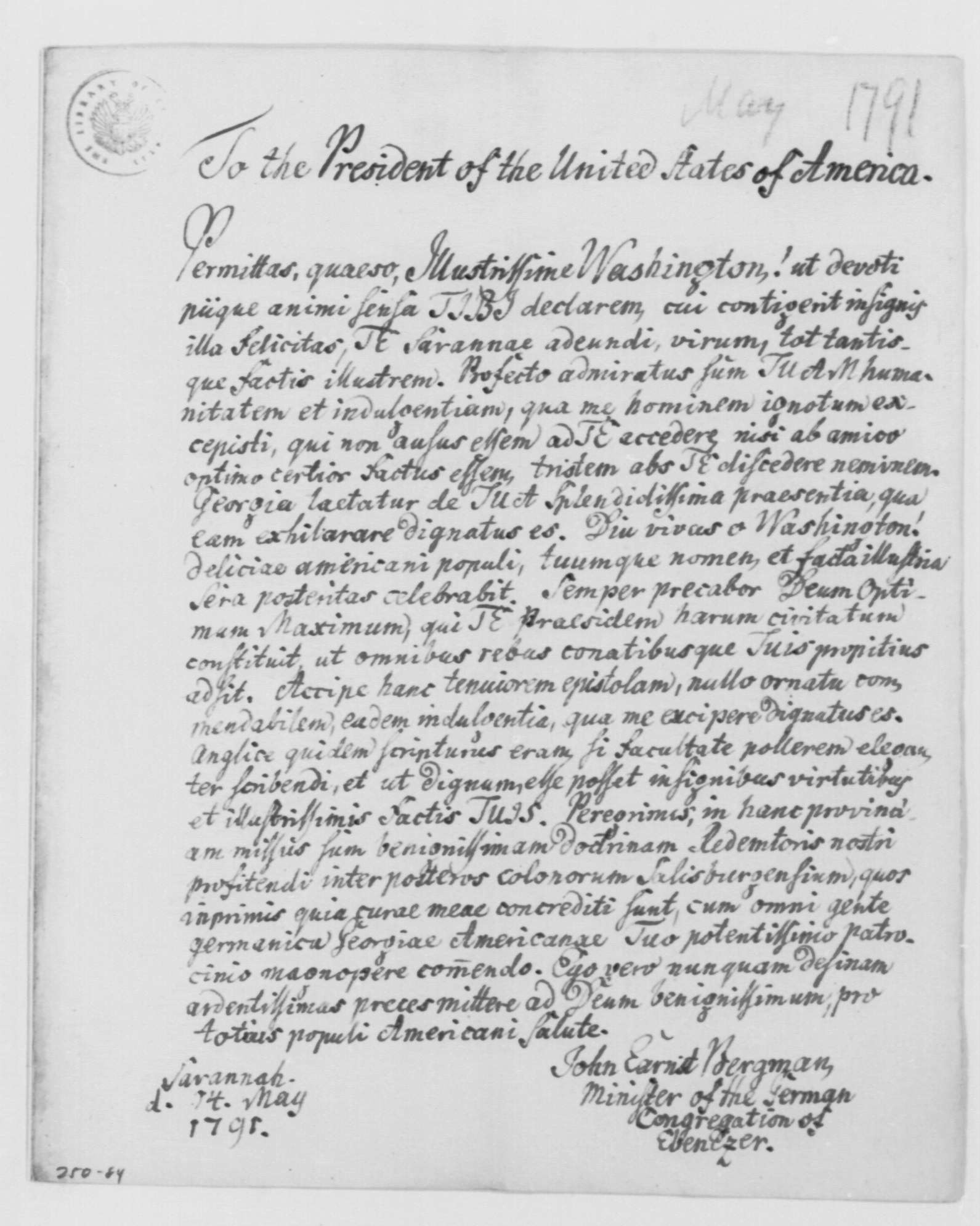 To the President of the United States of America:

John Earnst Bergman,
Minister of the German Congregation of Ebenezer
Savannah d. 14. May 1791

To the President of the United States of America:

Please allow me, Distinguished Washington, to declare my devoted and dutiful spirit to you, whom that distinguished success has touched, [upon] your coming to Savannah, you, a man, famous because of so many great deeds. In fact, I am surprised to see the humanity of thy life, and the way of indulgence [in which you], received me, a man unknown, afraid to approach you except that I have been assured that no one departs from you sad. Georgia is delighted by you and your most splendid presence, by which you have honored us. Long live Washington! And may your name be a delight of the American people, so that posterity will celebrate your true famous deeds.

I always will pray to God Almighty, who called you to be the president of these states, that he may be merciful in every way upon your endeavors. Accept this rather thin unworthy letter: were I able to write in English, I would write one more worthy of your famous virtue and illustrious deeds. I was sent as a foreigner into this province [which was] a very kind doctrine of Redemption, to care for those who share my faith in the colony of Salzburgers in American Georgia. We greatly trust in your very powerful patronage. For my part, I truly never shall cease to pray most ardently to the good and gracious God on behalf of the salvation of all Americans.

John Earnst Bergman,
Minister of the German Congregation of Ebenezer
Savannah d. 14. May 1791