Like other minority religious groups congratulating George Washington on his election as the nation’s first President, Roman Catholics asked Washington to affirm his commitment to religious liberty. 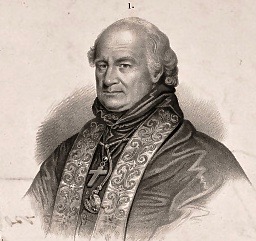 Archbishop John Carroll, from a lithograph by Lehman and Duval after a painting by Albert Newsam. Library of Congress Prints and Photographs Division Washington, D.C.,
LC-DIG-pga-06887.

Representatives of a range of religious denominations wrote letters congratulating George Washington on his election as first President of the United States. The letter penned by the Reverend John Carroll, who in 1784 had been named Vicar General of the Roman Catholic Church in the United States, resembles those of others. It praises the choice of a leader whom the nation as a whole respected, admired, and felt indebted to for his leadership during the war for independence. Also, like other letters from non-majority sects and religious groups, Carroll’s letter indirectly tests Washington’s commitment to religious liberty. Like Baptists, Quakers, and Jews, American Catholics wanted Washington to confirm their understanding of the provisions in Article VI, Section 3 of the Constitution and in the First Amendment that eliminated religious tests for office-holders, forbade the establishment of any particular faith, and guaranteed the free exercise of religion. 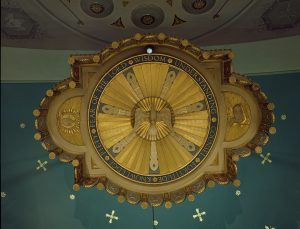 This detail of art in the interior of the Baltimore Basilica in Baltimore, Maryland displays the ideals of Archbishop John Carroll, who planned the edifice with the architectural expertise of Benjamin Latrobe, the architect Thomas Jefferson hired to complete the construction of the US Capitol Building. (Photographed by Carol M. Highsmith between 1980 and 2006. Library of Congress Prints and Photographs Division Washington, D.C. , LC-DIG-highsm-16722.)

Carroll’s letter and Washington’s response bear comparison with the justly famous exchange between Washington and the Hebrew Congregation of Newport, Rhode Island. Less poetic, and employing fewer Biblical allusions, than Moses Seixas’s letter to Washington, Carroll’s letter carries, perhaps, a tone of instruction in its congratulations and praises. In naming Washington’s particular virtues, the letter points to the kind of moral leadership that John Carroll thought could unite the adherents of all faiths in concern for the common good. Carroll commends Washington for leading as one who believes the affairs of men to be governed by “a superintending Providence” and the actions of individual men subject to the judgment of God. 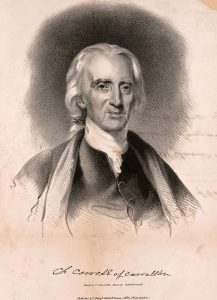 The cousin of John Carroll, Charles Carroll of Carrollton, signed the Declaration of Independence. Lithography by Childs and Inman, 1832, from a painting by T. Sully in 1826. Library of Congress Prints and Photographs Division Washington, D.C. 20540. LC-DIG-pga-11753

Carroll also refers to the scattered situation of Catholics in America, just now being organized into a single diocese. This situation owed to the suppression of the Catholic faith during the colonial period, and Carroll pointedly notes that the religious freedoms guaranteed in the federal Constitution are not yet granted by every state constitution. We might detect in Carroll’s letter his impatience that the Catholic community be invited to play an active role in building the new republic. In fact, Carroll’s cousin Charles Carroll had signed the Declaration, while his brother Daniel, a Maryland delegate to the Constitutional Convention, had signed the Constitution and served in the first Congress.

Washington’s response to the Catholic community, like all his other responses to congratulations sent by minority religious groups, affirms his commitment to religious liberty. At the same time, he affirms Carroll’s view that national progress in science and the arts depends upon the cultivation of “manners, morals and piety,” another point Washington wished to make in these letters. For Washington, religious freedom did not imply negligence of religious teaching.

To George Washington, President of the United States:

The Address of the Roman Catholics

We have long been impatient to testify our joy and unbounded confidence, on your being called by a unanimous vote, to the first station of a country, in which that unanimity could not have been obtained, without the previous merit of unexampled services of eminent wisdom and unblemished virtue. Our congratulations have not reached you sooner because our scattered situation prevented the communication and the collecting of those sentiments which animated every breast. But the delay has furnished us with the opportunity, not purely of presaging the happiness to be expected under your administration, but of bearing testimony to that which we experience already.

It is your peculiar talent, in war and in peace, to afford security to those who commit their protection into your hands. In war, you shield them from ravages of armed hostility; in peace, you establish public tranquility by the justice and moderation not less than by the vigor of your government. By example as well as by vigilance, you extend the influence of laws on the manners of our fellow-citizens. You encourage respect for religion, and inculcate by words and actions, that principle on which the welfare of nations so much depends, that a superintending Providence governs the events of the world, and watches over the conduct of men.

Your exalted maxims and unwearied attention to the moral and physical improvement of our country, have produced already the happiest effects. Under your administration America is animated with zeal for the attainment and encouragement of useful literature; she improves her agriculture, extends her commerce, and acquires with foreign nations a dignity unknown to her before. From these happy events, in which none can feel a warmer interest than ourselves, we derive additional pleasure in recollecting that you, sir, have been the principal instrument to effect so rapid a change in our political situation.

This prospect of national prosperity is peculiarly pleasing to us on another account, because whilst our country preserves her freedom and independence, we shall have a well founded title to claim from her justice equal rights of citizenship, as well as the price of our blood spilt under your eyes, and of our common exertions for her defense, under your auspicious conduct; rights rendered more dear to us, by the remembrance of former hardships.

When we pray for the preservation of them, where they have been granted, and expect the full extension of them from the justice of those states which still restrict them; when we solicit the protection of Heaven over our common country, we neither omit, nor can omit recommending your preservation to the singular care of Divine Providence; because we conceive that no human means are so available to promote the welfare of the United States, as the prolongation of your health and life, in which are included the energy of your example, the wisdom of your counsels, and the persuasive eloquence of your virtues.