Mother Bethel was one of the first African-American churches in the United States, dedicated July 29, 1794, by Bishop Francis Asbury. In 1816, it became the site of the new African Methodist Episcopal Church denomination. 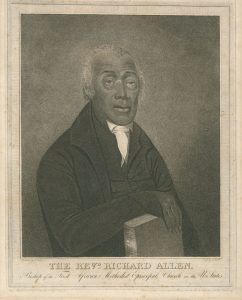 The Revd. Richard Allen, Bishop of the First African Methodist Episcopal Church in the U. States. Stipple engraving by John Boyd, after the oil painting by Rembrandt Peale (Philadelphia, 1823). Courtesy of the Library Company, https://librarycompany.org/.

Born into slavery in 1760, Richard Allen was converted by the preaching of a Methodist minister as a young man. He quickly became known for his eloquent and powerful ability to convey gospel truths in both word and deed; Allen resolved to serve his owner more faithfully than ever after his conversion, in order that no one in the white community would have an excuse to prevent enslaved persons from converting to Christianity for fear of its effect upon their work ethic. In time, Allen’s owner was himself converted to Methodism, and as a result, agreed to let Allen purchase his freedom.

After securing his freedom, Allen became an itinerant on the Methodist circuit, traveling throughout the upper South and the mid-Atlantic regions. He preached to both white and black congregations, taking on odd jobs to earn enough to pay his own way when hospitality in a town was lacking. Eventually, Allen settled in Philadelphia, where he became the de facto minister to the black congregation at St. George’s Methodist Church. Although the Methodist denomination was officially against slavery until well into the nineteenth century, many of its churches practiced segregation, forcing black parishioners to worship either at separate times or in separate spaces from the white congregation.

Despite the ill treatment, Allen used his influence among Philadelphia’s free black community to mobilize volunteers to assist with Dr. Benjamin Rush’s efforts to maintain public health during the city’s Yellow Fever epidemic 1793. 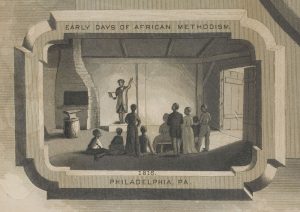 Their service during this time was invaluable, an act of mercy at tremendous personal risk, yet the leadership of St. George’s remained obstinate on the question of integration. Perhaps it was this slight that finally pushed Allen to break ties with the congregation; regardless, in 1794, he purchased a plot of land and a former blacksmith shop that he converted into a “bethel” or “house of worship” for what would become the African Methodist Episcopal Church.

Allen’s formal ordination in 1799 and the ongoing support of Bishop Francis Asbury (a leading official in American Methodism) made it easier for the new congregation to assert its independence from the white Methodists in Philadelphia, although it took nearly twenty years of legal wrangling before the leaders of St. George’s would admit that. Finally, in 1816, the Pennsylvania Supreme Court ruled that Bethel Church and its property belonged to Allen and his associates. 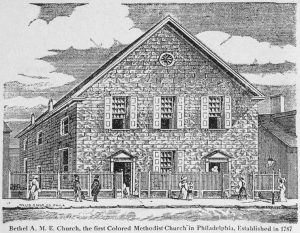 Throughout his life, Allen preached a gospel of freedom and equality, urging Americans to recognize that their shared Christianity mattered more than the different shades of their skin. He was vehemently opposed to all proposals for African Colonization. Although he initially discouraged women from preaching to mixed audiences of men and women, he was always a strong advocate for the spiritual equality of women. After hearing Jarena Lee preach extemporaneously in 1819, however, he changed his mind and supported her ministry as an itinerant preacher of the gospel along the eastern seaboard.

“Mother” Bethel A.M.E. Church, as it is now known, is the oldest church property in the United States to have been continuously owned by African Americans. A National Historic Landmark, it remains a vibrant center of worship in Philadelphia.