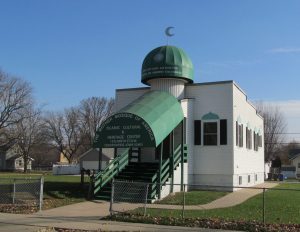 Muslims first arrived in what is now the United States in the early years of exploration and settlement. Often they came as African slaves or servants, but they also arrived as sailors, merchants, explorers and settlers. A Muslim appears to have been a colonist in New Amsterdam as early as 1630. Muslim numbers were small, however, until late in the nineteenth century, and not large even then, as immigrants from the Ottoman Empire and India arrived. Even these immigrants did not result in communities that could afford to build and maintain mosques. Islamic organizations did develop, however, often in connection with the purchase and maintenance of cemeteries where Muslims could be buried according to Islamic law and custom.

In the nineteenth century, many Muslim immigrants arriving from what is now Syria and Lebanon worked as peddlers in rural America, especially in the mid-west. Some of these immigrants learned about the opportunities available in the United States through attendance at Christian schools in the Middle East. (American Christians built these schools as part of their largely unsuccessful efforts to convert Muslims.) If these Muslims gathered for prayers, they did so in a home.

The first mosque in America was built in 1929 in Ross, North Dakota.[1] It is no longer standing.  The longest surviving mosque is in Cedar Rapids, Iowa. Now referred to as the Mother Mosque of America, it was finished in 1934.  The Mosque came about after the wives and children of the first male immigrants arrived, causing the community to grow to a size sufficient to support a mosque. The women in fact organized first into a social club, and then used this club to encourage the men to engage in the fundraising necessary to build the mosque.

The mosque was used until 1971, when the community had grown enough to warrant the construction of larger mosque, The Islamic Center of Cedar Rapids (http://crmosque.com/).  The first mosque was sold, fell into disrepair, and then was re-purchased by the Islamic Center in 1991. Today the Mother Mosque is used as a meeting place and cultural center.

The Mother Mosque is listed on the National Register of Historic Places as the “Moslem Temple,” the name by which it was known locally when first constructed.