The Mormons in Illinois

Many of the Mormons who fled Missouri headed to Quincy, Illinois, where they were taken in as refugees and were well-treated. Looking for a new home for his church, Smith eventually decided to buy the town of Commerce, situated in low-lying land along the Mississippi in western Illinois. Smith renamed the town Nauvoo, a name apparently derived from Hebrew and meaning “beautiful,” as found in Isaiah 52:7: 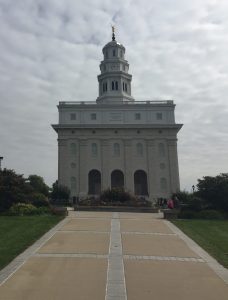 In addition to being an often cited biblical source for the name of the Mormon’s Illinois home, this verse captures something of the millennial vision of Mormonism.

When the Mormons arrived in Nauvoo, it was anything but beautiful, however. Until successfully drained, it was marshy land, productive of diseases such as cholera and malaria often associated with such settings. In addition to draining the land, the Mormons began building, following a grid plan devised by Smith. One of the first building projects the Mormons began was a temple. They laid the cornerstone, on higher ground overlooking the town, in 1841—although they would be forced to leave Nauvoo in 1846, before the temple was finished.

The population of Nauvoo grew steadily as Mormons gathered to the new town and converts arrived as well. Some of the converts came from England, where Brigham Young and others had gone on a mission. Like the early conversions in Kirtland, Ohio, the mission trip to Great Britain set a pattern that the Church follows to this day. Before the Mormons left Nauvoo, the population of the town made it one of the largest in Illinois.

Through the help of a politically connected convert, Nauvoo received a charter from the Illinois state government that gave the town considerable power, including the right to organize a militia. Joseph Smith came to hold most of the leadership positions in the city government, including heading the militia, although he had the assistance of various committees. Smith also articulated a doctrine of theodemocracy, which aimed to combine democracy, including elements of the US Constitution, with principles of theocratic rule. Theodemocracy was to be the government on earth after the second coming, when secular governments would be no more. Part of the plan was a secret organization called the Council of Fifty. Smith ran for President of the United States in 1844 advocating theodemocracy.

Theodemocracy was not the only new idea that Smith articulated while the Mormons were based in Nauvoo. He continued to receive revelations, which led to new or revised doctrines. The most controversial of these was polygamy or plural marriage, which Smith and a few others had been practicing quietly for a while but which Smith now began to discuss more broadly among the leaders of the church. (The church did not publicly acknowledge the practice until 1852.) Among the other doctrines developed in Nauvoo were baptism of the dead and endowment. The first was part of the Mormon effort to save all the souls God had created. The second was a ceremony to prepare Mormons for the afterlife in which they would be priests or priestesses. This idea was part of the fundamental notion of Mormonism that souls come to earth to work and improve themselves for an eternal life that souls will experience not just as individuals but as families. The Church also taught at this time what it called a law of consecration, by which members of the Church gave their property to the Church. This doctrine was never put into practice fully and was given up later in the nineteenth-century. 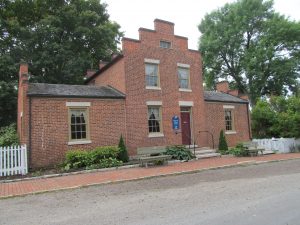 The restored home of Brigham Young in Nauvoo

None of the these ideas would have been commonplace in 19th century America, but neither would all of them have been entirely idiosyncratic. Ante-bellum America saw a good deal of theological and social experimentation. The latter included everything from celibacy (the Shakers) to complex marriage (the followers of John Humphrey Noyes). Utopian communes were not at all uncommon. Even Mormon cosmology, complex and in many ways unique, had connections to other contemporary theological developments in Great Britain and the United States. In its origins, the Mormon movement was related to other so-called restorationist efforts that sought a return to a purer, more original Christianity. The first name of Smith’s church was the Church of Christ, identical to the names of other restoration churches. Later Smith changed the name of the church to Church of Jesus Christ of Latter Day Saints. 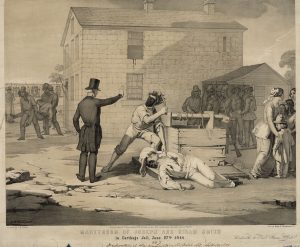 Martyrdom of Joseph and Hiram Smith in Carthage jail, June 27th, 1844 (Lithograph by by C.G. Crehen, ca. 1851). Courtesy of Library of Congress.

As the Mormon settlement grew in Nauvoo and word of its unusual doctrines and practices spread, the conflict that had occurred in Missouri recurred in Illinois. As in Missouri, antagonism to Mormon political and economic power was an important source of friction as well. Smith’s advocacy of theodemocracy did nothing to ease tensions, which reached a critical point in 1844, when the authorities in Nauvoo approved the destruction of the press that a church dissenter had used to publish a newspaper critical of Smith and Mormon activities in Nauvoo. Following the destruction of the press by the Nauvoo militia, critics called for Smith’s arrest. Both Smith and his brother were taken into custody and held in the jail at the county seat, in Carthage. A mob broke into the jail and killed both men. 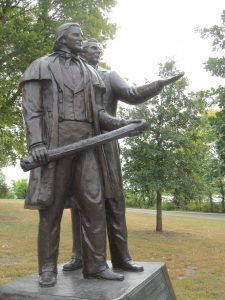 A statue at the Mississippi landing in the restored village of Nauvoo, depicting Smith pointing out to Brigham Young the way to the new Zion in the West

Following Smith’s death, Brigham Young emerged as the Church’s new leader.  In the face of ongoing conflict and threats of violence, Young and the Mormon leadership announced their intention to leave Nauvoo. Preparations were made throughout late 1845. Early in 1846, the first Mormons crossed the Mississippi into Iowa and prepared for the great trek west in search of their new Zion. In September 1846, the small number of Mormons remaining in Nauvoo were attacked by a mob, forcing them to join the others in the trek west. The temple was destroyed by arson in 1848.

In recent years, the Mormon church based in Salt Lake City has bought land in Nauvoo and built a replica of the 1840s settlement. The church has also rebuilt the temple.