Several months after the end of the Revolutionary War, a Philadelphia synagogue petitioned the Pennsylvania Council of Censors, asking that public officeholders no longer be required to take an oath affirming their Christian belief.

Like the majority of the state constitutions adopted after the thirteen colonies declared their independence from Britain, that of the new state of Pennsylvania specified a religious test for office holders. Such tests derived from an English common law tradition, based in the belief that only those who feared divine punishment for perjury could be trusted to state the truth in a court of law. A similar precaution was taken with regard to officeholders, lest their positions of authority hide misconduct. Pennsylvania’s test stipulated that any person holding public office in the state must take an oath affirming his “belief in God, the Creator and Governor of the universe, the rewarder of the good and the punisher of the wicked” as well as his belief that the “Scriptures of the Old and New Testaments were given by divine inspiration” (Pennsylvania Frame of Government, 1776, sec. 10).*

The latter affirmation barred non-Christians from elected office. To the Jewish community of Philadelphia, this religious test not only prohibited practicing Jews from serving in the state legislature; it implied a doubt that Jews could be trusted. 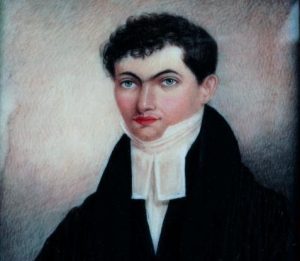 A few months after the Revolutionary War concluded in the signing of the Treaty of Paris, members of Philadelphia’s Congregation Mikveh Israel petitioned Pennsylvania’s Council of Censors, stating their opposition to the test. Rabbi Gershom Seixas, leader of Mikveh Israel, almost certainly wrote the petition. Seixas, an outspoken Patriot, had left his post as rabbi at New York City’s Congregation Shearith Israel in 1776, rather than live under British occupation. Three months after authoring the protest, Seixas returned to New York (which, as the petition notes, did not impose a religious test for office) and resumed his duties as rabbi there.

The Jewish petitioners did not object to prohibiting atheists from holding office. But they noted that barring non-Christians from office was inconsistent with another of the state’s founding documents, the Pennsylvania Declaration of Rights.

The Pennsylvania constitution of 1790 revoked the requirement that officeholders profess Christianity.

Petition of the Philadelphia Synagogue to Council of Censors of Pennsylvania, December 23, 1783

By the tenth section of the frame of government of this commonwealth, it is ordered that each member of the general assembly of representatives of the freemen of Pennsylvania, before he takes his seat, shall make and subscribe a declaration, which ends in these words, “I do acknowledge the scriptures of the old and new testament to be given by divine inspiration,” to which is added an assurance, that “no further or other religious test shall ever hereafter be required of any civil officer or magistrate in this state.”

Your memorialists beg leave to observe, that this clause seems to limit the civil rights of your citizens to one very special article of the creed; whereas by the second paragraph of the declaration of the rights of the inhabitants, it is asserted without any other limitation than the professing the existence of God, in plain words, “that no man who acknowledges the being of a God can be justly deprived or abridged of any civil rights as a citizen on account of his religious sentiments.” But certainly this religious test deprives the Jews of the most eminent rights of freemen, solemnly ascertained to all men who are not professed atheists.

May it please your honors: Although the Jews in Pennsylvania are but few in number, yet liberty of the people in one country, and the declaration of the government thereof, that these liberties are the rights of the people, may prove a powerful attractive to men, who live under restraints in another country. Holland and England have made valuable acquisitions of men, who for their religious sentiments, were distressed in their own countries.

And if Jews in Europe or elsewhere, should incline to transport themselves to America, and would, for reason of some certain advantage of the soil, climate, or the trade of Pennsylvania, rather become inhabitants thereof, than of any other state; yet the disability of Jews to take seat among the representatives of the people, as worded by the said religious test, might determine their free choice to go to New York, or to any other of the United States of America, where there is no such like restraint laid upon the nation and religion of the Jews, as in Pennsylvania.

Your memorialists cannot say that the Jews are particularly fond of being representatives of the people in assembly or civil officers and magistrates in the state; but with great submission they apprehend that a clause in the constitution, which disables them to be elected by their fellow citizens to represent them in assembly, is a stigma upon their nation and religion, and it is inconsonant with the second paragraph of the said bill of rights; otherwise Jews are as fond of liberty as their religious societies can be, and it must create in them a displeasure, when they perceive that for their professed dissent to doctrine, which is inconsistent with their religious sentiments, they should be excluded from the most important and honorable part of the rights of a free citizen.

Your memorialists beg further leave to represent, that in the religious books of the Jews, which are or may be in every man’s hands, there are no such doctrines or principles established as are inconsistent with the safety and happiness of the people of Pennsylvania, and that the conduct and behavior of the Jews in this and the neighboring states, has always tallied with the great design of the Revolution; that the Jews of Charlestown, New York, Newport, and other posts, occupied by the British troops, have distinguishedly suffered for their attachment to the Revolution principles; and their brethren at St. Eustatius, for the same cause, experienced the most severe resentments of the British commanders.

The Jews of Pennsylvania, in proportion to the number of their members, can count with any religious society whatsoever, the Whigs among either of them; they have served some of them in the Continental army; some went out in the militia to fight the common enemy; all of them have cheerfully contributed to the support of the militia, and of the government of this state; they have no inconsiderable property in lands and tenements, but particularly in the way of trade, some more, some less, for which they pay taxes; they have, upon every plan formed for public utility, been forward to contribute as much as their circumstances would admit of; and as a nation or a religious society, they stand unimpeached of any matter whatsoever, against the safety and happiness of the people.

And your memorialists humbly pray, that if your honors, from any consideration than the subject of this address, should think proper to call a convention for revising the constitution, you would be pleased to recommend this to the notice of that convention.

The text of the petition is taken from The Freeman’s Journal or The North-American Intelligencer (Philadelphia), January 21, 1784.