If prayer were made of sound, the skies over England that night would have deafened the world.

Captains paced their decks.  Pilots tapped their gauges.  Commanders pored over maps, fully aware that for all the months of meticulous planning, everything could go wrong — the winds, the tides, the element of surprise — and above all, the audacious bet that what waited on the other side of the Channel would compel men not to shrink away, but to charge ahead.

Fresh-faced GIs rubbed trinkets, kissed pictures of sweethearts, checked and re-checked their equipment. “God,” asked one, “give me guts.”  And in the pre-dawn hours, planes rumbled down runways; gliders and paratroopers slipped through the sky; giant screws began to turn on an armada that looked like more ships than sea.  And more than 150,000 souls set off towards this tiny sliver of sand upon which hung more than the fate of a war, but rather the course of human history. …

Here, we don’t just commemorate victory, as proud of that victory as we are.  We don’t just honor sacrifice, as grateful as the world is.  We come to remember why America and our allies gave so much for the survival of liberty at its moment of maximum peril.  We come to tell the story of the men and women who did it so that it remains seared into the memory of a future world.

We tell this story for the old soldiers who pull themselves a little straighter today to salute brothers who never made it home.  We tell the story for the daughter who clutches a faded photo of her father, forever young; for the child who runs his fingers over colorful ribbons he knows signify something of great consequence, even if he doesn’t yet fully understand why.  We tell this story to bear what witness we can to what happened when the boys from America reached Omaha Beach.

By daybreak, blood soaked the water, bombs broke the sky.  Thousands of paratroopers had dropped into the wrong landing sites; thousands of rounds bit into flesh and sand.  Entire companies’ worth of men fell in minutes.  “Hell’s Beach” had earned its name.

By 8:30 a.m., General Omar Bradley expected our troops to be a mile inland.  “Six hours after the landings,” he wrote, “we held only ten yards of beach.”  In this age of instant commentary, the invasion would have swiftly and roundly been declared, as it was by one officer, “a debacle.”

But such a race to judgment would not have taken into account the courage of free men.  “Success may not come with rushing speed,” President Roosevelt would say that night, “but we shall return again and again.”  And paratroopers fought through the countryside to find one another.  Rangers pulled themselves over those cliffs to silence Nazi guns.  To the west, Americans took Utah Beach with relative ease.  To the east, the British tore through the coast, fueled by the fury of five years of bombs over London and a solemn vow to “fight them on the beaches.”  The Canadians, whose shores had not been touched by war, drove far into France.  And here, at Omaha, troops who finally made it to the seawall used it as shelter — where a general barked, “If you’re Rangers… lead the way!”

By the end of that longest day, this beach had been fought, lost, refought, and won — a piece of Europe once again liberated and free.  Hitler’s Wall was breached, letting loose Patton’s Army to pour into France.  Within a week, the world’s bloodiest beach had become the world’s busiest port.  Within a month, one million Allied troops thundered through Normandy into Europe, and as our armies marched across the continent, one pilot said it looked “as if the very crust of the Earth had shaken loose.”  The Arc de Triomphe lit up for the first time in years, and Paris was punctuated by shouts of “Vive la France!” and “Vive les États-Unis!”  (Applause.)

Of course, even as we gather here at Normandy, we remember that freedom’s victory was also made possible by so many others who wore America’s uniform.  Two years before he commanded armies, Eisenhower’s troops sliced through North Africa.  Three times before D-Day, our GIs stormed the beaches at Sicily, Salerno, Anzio.  Divisions like the Fighting 36th brawled their way through Italy, fighting through the mud for months, marching through towns past waving children before opening the gates to Rome.  As the “dogfaces” marched to victory in Europe, the Devil Dogs — the Marines — clawed their way from island to island in the Pacific, in some of the war’s fiercest fighting.  And back home, an army of women — including my grandmother — rolled up their sleeves to help build a mighty arsenal of democracy.

But it was here, on these shores, that the tide was turned in that common struggle for freedom.  What more powerful manifestation of America’s commitment to human freedom than the sight of wave after wave after wave of young men boarding those boats to liberate people they had never met?

We say it now as if it couldn’t be any other way.  But in the annals of history, the world had never seen anything like it.  And when the war was won, we claimed no spoils of victory — we helped Europe rebuild.  We claimed no land other than the earth where we buried those who gave their lives under our flag and where we station those who still serve under it.  But America’s claim — our commitment — to liberty, our claim to equality, our claim to freedom and to the inherent dignity of every human being — that claim is written in the blood on these beaches, and it will endure for eternity.

Omaha — Normandy — this was democracy’s beachhead.  And our victory in that war decided not just a century, but shaped the security and well-being of all posterity.  We worked to turn old adversaries into new allies.  We built new prosperity.  We stood once more with the people of this continent through a long twilight struggle until finally a wall tumbled down, and an Iron Curtain, too.  And from Western Europe to East, from South America to Southeast Asia — 70 years of democratic movement spread.  And nations that once knew only the blinders of fear began to taste the blessings of freedom.

None of that would have happened without the men who were willing to lay down their lives for people they’d never met and ideals they couldn’t live without.

None of it would have happened without the troops President Roosevelt called “the life-blood of America… the hope of the world.”

They left home barely more than boys and returned home heroes.  But to their great credit, that is not how this generation carried itself.  After the war, some put away their medals, were quiet about their service, moved on.  Some, carrying shrapnel and scars, found that moving on was much harder.  Many, like my grandfather, who served in Patton’s Army, lived a quiet life, trading one uniform and set of responsibilities for another — as a teacher, or a salesman, or a doctor, or an engineer, a dad, a grandpa.

Our country made sure millions of them earned a college education, opening up opportunity on an unprecedented scale.  And they married those sweethearts and bought new homes and raised families and built businesses, lifting up the greatest middle class the world has ever known.  And through it all, they were inspired, I suspect, by memories of their fallen brothers — memories that drove them to live their lives each day as best they possibly could.

Think of Wilson Colwell, who was told he couldn’t pilot a plane without a high school degree, so he decided to jump out of a plane instead.  And he did, here on D-Day, with the 101st Airborne when he was just 16 years old.

Think of Harry Kulkowitz, the Jewish son of Russian immigrants, who fudged his age at enlistment so he could join his friends in the fight.  And don’t worry, Harry, the statute of limitations has expired.  (Laughter.)  Harry came ashore at Utah Beach on D-Day.  And now that he’s come back, we said he could have anything he wants for lunch today — he helped liberate this coast, after all.  But he said a hamburger would do fine.  (Laughter.)  What’s more American than that?

Think of “Rock” Merritt, who saw a recruitment poster asking him if he was man enough to be a paratrooper — so he signed up on the spot.  And that decision landed him here on D-Day with the 508th regiment, a unit that would suffer heavy casualties.  And 70 years later, it’s said that all across Fort Bragg, they know Rock — not just for his exploits on D-Day, or his 35 years in the Army, but because 91-year-old Rock Merritt still spends his time speaking to the young men and women of today’s Army and still bleeds “O.D. Green” for his 82nd Airborne.

Whenever the world makes you cynical, whenever you doubt that courage and goodness is possible — stop and think of these men.

Wilson and Harry and Rock, they are here today, and although I know we already gave them a rousing round of applause, along with all our veterans of D-Day — if you can stand, please stand; if not, please raise your hand.  Let us recognize your service once more.  (Applause.)  These men waged war so that we might know peace.  They sacrificed so that we might be free.  They fought in hopes of a day when we’d no longer need to fight.  We are grateful to them.  (Applause.)

And, gentlemen, I want each of you to know that your legacy is in good hands.  For in a time when it has never been more tempting to pursue narrow self-interest, to slough off common endeavor, this generation of Americans, a new generation — our men and women of war — have chosen to do their part as well. …

We are on this Earth for only a moment in time.  And fewer of us have parents and grandparents to tell us about what the veterans of D-Day did here 70 years ago.  As I was landing on Marine One, I told my staff, I don’t think there’s a time where I miss my grandfather more, where I’d be more happy to have him here, than this day.  So we have to tell their stories for them.  We have to do our best to uphold in our own lives the values that they were prepared to die for.  We have to honor those who carry forward that legacy, recognizing that people cannot live in freedom unless free people are prepared to die for it.

And as today’s wars come to an end, this generation of servicemen and women will step out of uniform, and they, too, will build families and lives of their own.  They, too, will become leaders in their communities, in commerce, in industry, and perhaps politics — the leaders we need for the beachheads of our time.  And, God willing, they, too, will grow old in the land they helped to keep free.  And someday, future generations, whether 70 or 700 years hence, will gather at places like this to honor them and to say that these were generations of men and women who proved once again that the United States of America is and will remain the greatest force for freedom the world has ever known.  (Applause.) 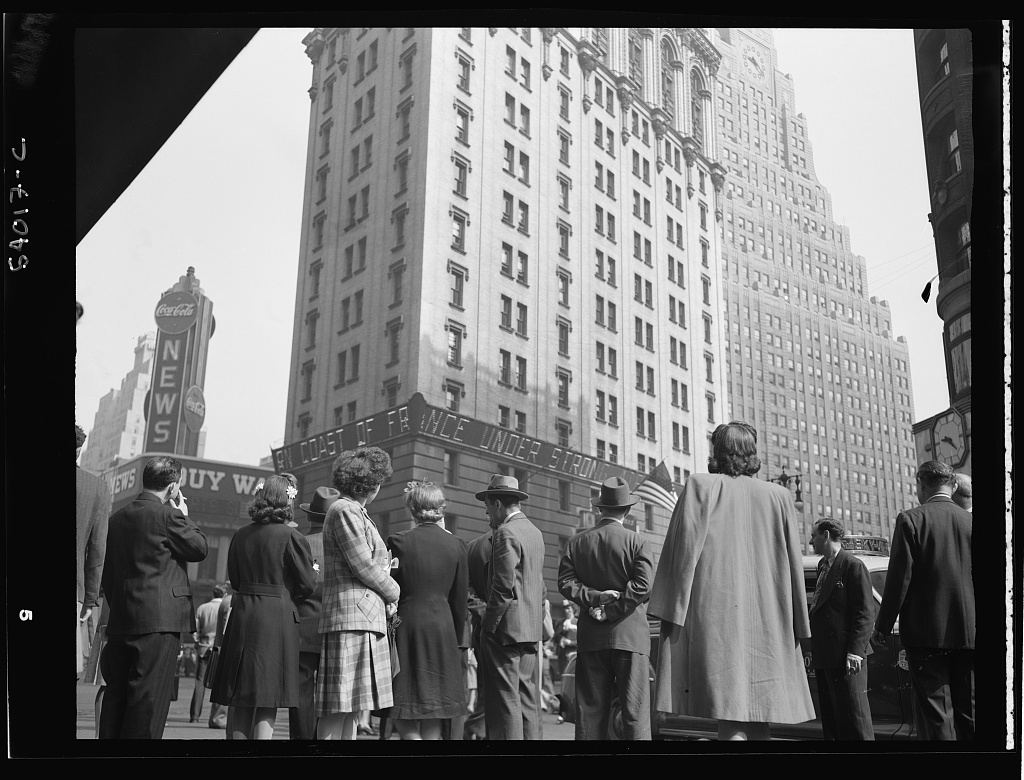 Remembering Religious Responses on the 75th Anniversary of D-Day