Rabbi Wise was an outspoken peace activist in the early 1910s, yet after the United States entered World War I in 1917, he spoke regularly about the justness and even holiness of the war effort. For this he was criticized sharply by his former allies; the address that follows combines the literary form of an apology with that of an appeal. 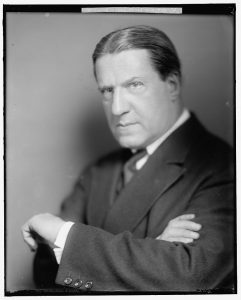 In the speech, Wise explains his about face on the question as a matter of principle: he equates the geo-political aspirations of the German state with tyranny and the end of international democracy. Moreover, he elevates the war to the level of justice and truth, calling it “the holiest of causes.” Although there is no overt evidence in the text that Wise had the establishment of a Jewish state in mind during this speech, during this same period he was actively corresponding with English Zionists participating in drafting the Balfour Declaration that created modern Israel.

I have the right to speak out. I have never feared to be in a minority. I am not fearful today. Show me a cause, and I will speak out, though alone. I have never held “My country, right or wrong.” Whenever I believed my city, State, or country to be in the wrong, I have dared to cry out, and I have done it again and again. What is more, I have done it at a cost. My convictions, like my pulpit, are my own. I have ever held, with another American of alien birth, whom the perfidy of Prussia gave to America, a patriot in peace and a hero in war, “My country, when right to keep right, when wrong to set right.”

Today my country is in the right. My country is not only in the right, but it is wholly, gloriously, holily in the right, and I mean to proclaim this, even though I find myself almost for the first time one of an uncomfortably large majority.A word must be spoken in justification of those of us who have been peace men, opponents of militarism, who seem now to belie the professions of a lifetime. The easiest way to dispose of us is to hold that we were fair-weather friends of peace, and that the moment it became difficult and hurtful to remain peace advocates, in that moment we scuttled like rats. Some of us think we may claim to have earned the right to respect for the integrity of our convictions on the score of unafraid speech and acts.

What is the secret of the transformation of us who have been lifelong anti-militarists into unequivocal supporters of the Government and its war policies? The answer to the question, What has moved us to waive, or to seem to waive, our faith that war is never justifiable? has been given adequately, as far as we are concerned, by the course of the President of the United States since August, 1914. He willed, as we willed, not to enter the war; he believed, as we believed, that the cause is just and durable peace would best be furthered by keeping our continent outside of the war zone, not that we might softly and meanly save ourselves and our sons, but that we might greatly and nobly serve a war-wearied world.
In all this — the personal reference must be forgiven — I was not neutral, not for one moment since the war began. I did not choose to side with the Allies. Prussia and Prussianism left me no freedom of choice. Prussia made a choice unnecessary, even impossible, since the beginning of the war to all those whose power to judge morally was not deadened by a sense of mistaken loyalties.
Is there any man who imagines that, because his mother or father was born within one of the Central European States, he must be a supporter of the present German Government? I loved and honored my father, who was a native, and throughout much of his life a citizen, of one of the German empires ; but I will not dis-honor my father in his grave by believing that if he were living he would not have felt as deeply as I feel that no room must be left in the world for that species of organized criminality temporarily invested with the name and title of the German Government. It were a poor and woefully mistaken loyalty on my part to assume that my father would have condoned, and even commended, the Prussian way of “live and not let live” which is abhorrent to the soul of every just being.

Speedy, universal, and democratic peace ! Let us not be deceived. These terms are not interchangeable.
Peace might be effected speedily and universally. If withal the peace be not democratic, it will not be worthy of the name of peace. That the peoples of earth desire peace, speedy and universal, is the veriest truism, for such yearning is born out of the travail and agony of three years of hell-like war. The one guarantee upon which the bleeding peoples must insist is that the peace shall be democratic, for none other can be just and lasting. Kaisers broke peace and made war. The people must break Kaisers and make peace.

”Will we be ready to end the war and make peace if this ruthless submarine warfare be ended?” The war has long ceased to be a matter of ending ruthless submarine warfare. There will be no peace until the German people, disobedient to the Hohenzollern vision, are ready to end their sub-human warfare, ruthless and truthless, on sea and on land and in the air, against the peace and security of the world. It seems needless iteration to say to the spokesman of the People’s Council, anent his sneer touching the making of the world safe for democracy, that what we are fighting for is nothing less than that high and majestic end.
“What degree of safety do we require, and what degree of democracy will satisfy us?” Such a degree of safety is required that a renewal of the German imperial felony shall be impossible, such a degree, of safety as shall be assured to the world by the inability or the un- willingness of Germany to renew the crime of 1914, such a degree of democracy as can come only after the passing of Kaiserism, militarism, Junkerism.

…
…The German people must come to see that German militarism has brought down upon
her the loathing of the lawful and honorable peoples of earth, and may yet necessitate a concert of peoples in order to prevent the world being made unsafe for democracy and peace by reason of German autocracy and German militarism.

Germany must not only be compelled to realize that her militarism is far from invincible, but this must be brought home in a Germanly understandable way. In a word, no gain of any kind must be suffered to accrue to Germany in consequence of the war. Not invincible and most unprofitable must German militarism be shown to be to the German people. It is because of this that the evacuation of ravaged lands and the restoration of plundered goods will not suffice. If, at the end of the war, the Central European Alliance be established under Prussian domination, for one thing Prussia will have won a hundred Belgiums and Alsace-Lorraines, and over and beyond that the seed will have been planted which in the next generation will yield a harvest of bitter and bloody revolt against Prussian dominance by the alien, rather than Allied, peoples of Austro-Hungary, Bul- garia, and Turkey. In a word, Prussia must not be permitted to reimburse itself for its failure in the west by annexing central Europe. No gain or profit of any kind for Germany from this war — must be Germany’s fate, as it is the decree of free peoples. Germany must long remain, as she is to become, infinitely poorer by reason of the forfeiture of the world’s respect, which nothing less than the exorcism of the devil of militarism shall ever regain for the purged soul of the Germans.

What are we fighting for? My answer to mothers and fathers is — enviable, even glorious is your lot if you give your sons or bless their self-dedication to the highest and holiest of causes in which a people was ever engaged. Remember that you American men and women give your sons to no ordinary war, though outwardly it be war and nothing more. Remember that America is not in war for the sake of war. Grimly mocking paradox though it be, we have taken up the burden of war not for the sake of war, but for the sake of peace, which we would fain have bless victor and vanquished alike. We have taken up arms which we shall never ground until the world be made safe in the only way in which the life of nations dwelling together can be made safe, by democracy with peace and healing on its wings.

Remember this is not a war — it is the war. It is the contest of the ages, which we and our allies together can make the last human holocaust, if we be mighty in war and even mightier in the generosities and magnanimities of peace. Your sons have taken up arms not to slay, but to bring the hope of unbroken life to countless generations unborn. As your sons bear fault to battle, be strong mothers and fathers in the knowledge that the sacrificial task unto which they are bent is nothing less than to make the world free. If suffering and agony be your and their lot, call to mind the little children of Armenia, the wronged women of Belgium, the enslaved men of Serbia, and know that these things can never again come to pass, if your sons, our younger brothers, be equal to the challenge which a free world cannot refuse to meet.

And when you join in the act of sacrifice, let your spirit be willing and even joyous as befits the task that summons. Forget not that the sacrifice is to be for that which is more precious than life, even as holy as love — the liberty of men, the security of peace, the faith of nations. Your readiness to sacrifice may make sacrifice unasked hereafter, and your children’s children, yea, all the children of men, shall dwell amid peace and security if the nobleness of the fathers be equal to the heroism of the sons. It is not too late to save the world, to make and keep the world free, to rebuild an order of life that shall be just and righteous altogether. That shall come to pass if you claim for your sons something better than life, remembering to a man’s perdition to be safe, when for the truth he ought to die.