Constructed between 1759-1763 for a Jewish congregation that had been meeting in Newport for over a century, Touro Synagogue is the oldest Jewish synagogue in the United States.

“Children of the Stock of Abraham” in America: The Jewish Congregation of Newport 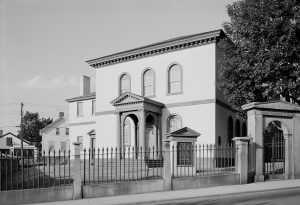 After the Dutch lost control of their settlements in Brazil to the Portuguese in the mid-seventeenth century, the small Sephardic Jewish community that had flourished under the tolerant laws of the Netherlands found themselves in diaspora. A handful of these families migrated north, eventually settling in Newport, Rhode Island around 1658. Founded as a haven for religious dissenters, colonial Rhode Island was a notably diverse and relatively religiously tolerant society where the Jewish population could expect to flourish without fear of reprisal. Indeed, the community did so well that in the mid-eighteenth century, they began construction on the first synagogue in America.

The building and its interior furnishings reflect the elegant neo-classicalism popular in the mid- to late- eighteenth century, and suggest the success of the Newport congregation in adapting to their new home. The integration of the Newport Jewish community with the rest of the town is also indicated by the placement of their house of worship. 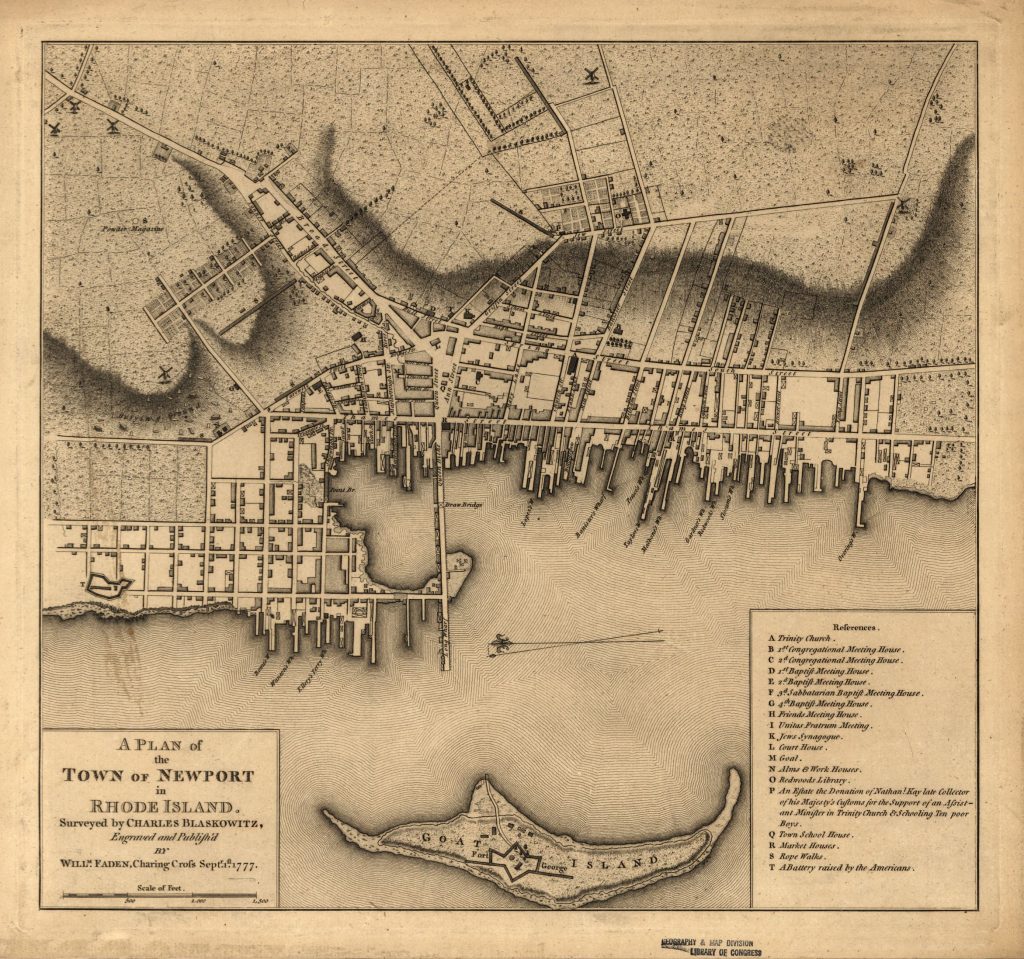 A Plan of the Town of Newport by Charles Blaskowitz. London: William Faden, 1777. Library of Congress, Geography and Map Divison, 74692104.

The synagogue (indicated by the letter K on the map) was located in the heart of Newport’s commercial and governmental activity; note the shading which indicates its prime situation on a rise overlooking the harbor, and its close proximity to the courthouse (L).

The dedication of the synagogue was described in a diary entry by local Congregational minister Ezra Stiles.

In the Afternoon was the dedication of the new Synagogue in this Town. It began by a handsome procession in which were carried the Books of the Law, to be deposited in the Ark. Several Portions of Scripture and of their Service with a Prayer for the Royal Family, were read and finely sung by the priest and People. There were present many Gentlemen and Ladies. The Order and Decorum, the Harmony and Solemnity of the Musick, together with a handsome Assembly of People, in an Edifice the most perfect of the Temple kind perhaps in America and splendidly illuminated, could not but raise in the Mind a faint Idea of the Majesty and Grandeur of the Ancient Jewish Worship mentioned in Scripture. 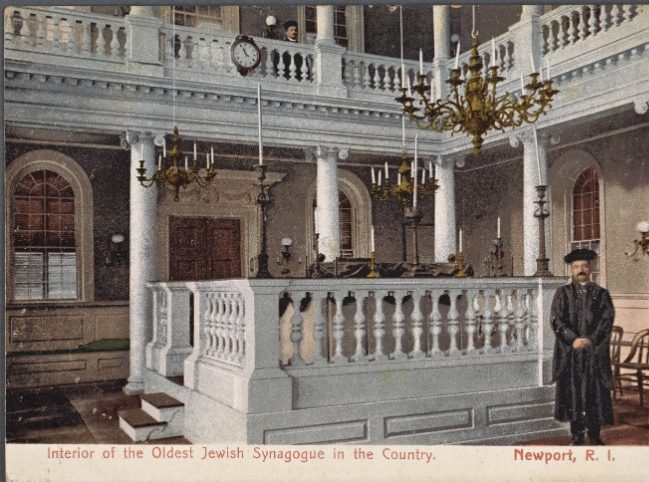 Dr. Isaac de Abraham Touro performed the Service. The Synagogue is about perhaps fourty foot long and 30 wide, of Brick on a Foundation of Free Stone; it was begun about two years ago, and is now finished except the Porch and the Capitals of the Pillars. The Front representation of the holy of holies, or its Partition Veil, consists only of wainscotted Breast Work on the East End, in the lower part of which four long Doors cover an upright Square Closet the depth of which is about a foot or the thickness of the Wall, and in this Apartment (vulgarly called the Ark) were deposited three copies and Rolls of Pentateuch, written on Vellum or rather tanned Calf Skin: one of these Rolls I was told by Dr. Touro was presented from Amsterdam and is Two Hundred years old, the letters have the Rabbinical Flourishes. A Gallery for the Women runs around the whole Inside, except the East End, supported by Columns of Ionic order, over which are placed correspondent columns of the Corinthian order supporting the Ceiling of the Roof, the Depth of the Corinthian Pedestal is the height of the Balustrade which runs around the Gallery. The pulpit for Reading of the Law, is a raised Pew with an extended front table; this placed about the center of the Synagogue or nearer the West End being a square embalustraded comparting with the length of the Indented Chancel before and at the Foot of the Ark.

On the middle of the North Side and Affixed to the Wall is a raised Seat for the Parnas or Ruler, and for the Elders; the Breast and Back interlaid with Chinese Mosaic Work. A Wainscotted Seat runs around the Side of the Synagogue below and another in the Gallery. There are no other Seats or Pews. There may be Eighty Souls of Jews or 15 families now in Town. The Synagogue has already cost Fifteen Hundred Pounds Sterling. There are to be five Lamps pendant from a lofty Ceiling.

“To Bigotry No Sanction”: Washington’s Visit to Newport

In 1790, shortly after Rhode Island ratified the Constitution, George Washington visited the state to promote passage of the pending amendments to the Constitution. Now known as the Bill of Rights, these amendments were largely a response to Anti-Federalist fears about the extensive powers of the national government and delineated several essential personal rights as beyond the reach of Congressional legislation. To many Americans, especially those belonging to minority religious groups, the most significant of the proposed amendments was the one protecting religious liberty. 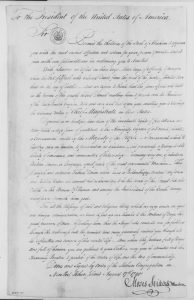 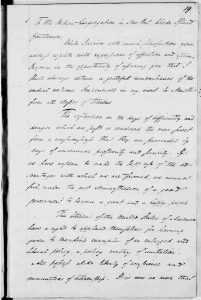 In Newport, Washington was met by a welcoming delegation of the town’s leading citizens, among whom was Moses Seixas, the warden of the Touro Synagogue. In his address, Seixas left no doubt of his support for the proposed religious liberty amendment, expressing his relief and gratitude to “the Ancient of Days, the great preserver of men” that the Jews–so often grievously “deprived … of the invaluable rights of free Citizens” on account of their religion–now lived under a government “which to bigotry gives no sanction, to persecution no assistance.”

In Washington’s response, the new president quoted Seixas’ description of the government of the new nation as one where neither bigotry nor persecution on religious grounds were to enjoy protection.

The citizens of the United States of America have a right to applaud themselves for having given to mankind examples of an enlarged and liberal policy—a policy worthy of imitation. All possess alike liberty of conscience and immunities of citizenship.

It is now no more that toleration is spoken of as if it were the indulgence of one class of people that another enjoyed the exercise of their inherent natural rights, for, happily, the Government of the United States, which gives to bigotry no sanction, to persecution no assistance, requires only that they who live under its protection should demean themselves as good citizens in giving it on all occasions their effectual support.

Invoking the common heritage of Jews and the nation’s Christian majority, Washington closed his letter to the Jewish congregation by expressing his hopes that the “children of the stock of Abraham” in America would “continue to merit and enjoy the good will of the other inhabitants,” and that all of that nation’s citizens would find “light, and not darkness upon [their] paths.”