The Ghost Dance Movement was a religious response to United States territorial expansion in the late-nineteenth century. Founded by Wovoka, a Northern Paiute man, after he experienced a vision of his ancestors enjoying traditional life in heaven, the movement was both mystical and millenarian.

Wovoka fused elements of traditional native spirituality with Christianity, and told his followers that God wanted them to cultivate peace and personal virtue in preparation for a coming time of prosperity.  A key element of Wovoka’s message was the need for Native peoples to return to their traditional ways, and he taught them a new circle dance meant to bring on a trance-state that would restore the spiritual connection between the living and their dead ancestors (hence the name ‘Ghost Dance Movement’).

“You must not fight. Do no harm to anyone. Do right always.”

Wovoka, founder of the Ghost Dance Religion, quoted in James Mooney, The Ghost-Dance Religion and the Sioux Outbreak of 1890 (n.d.), 147.

When this mystical renewal had been fully accomplished, Wovoka taught his followers that the whites would leave the land, and all the native tribes of the west—having forsaken their past differences and been unified by their pursuit of holiness—would be able to live peacefully together.

“The great underlying principle of the Ghost dance doctrine is that the time will come when the whole Indian race, living and dead, will be reunited upon a regenerated earth, to live a life of aboriginal happiness, forever free from death, disease, and misery.”

Although Wovoka’s account of his visions emphasized cultural and spiritual renewal through the cultivation of peaceableness, humility, and love, the millenarian elements of his teachings inspired the Lakota Sioux to attempt to bring about cultural restoration more forcibly. The Lakota began to equate Wovoka’s message of renewal with resistance to the United States both politically and militarily. To prepare for this, they created elegant Ghost Dance shirts. These were believed were so imbued with spiritual power that they would protect the wearer from being injured in battle.

From Piety to Resistance

After United States agents forced the tribe to disperse onto inferior and smaller reservation lands in 1890, the Lakota began an ongoing series of Ghost Dances as part of a communal atonement and purification process. To government observers, the religious movement thus became linked with the native resistance movement: newspapers across the United States reported on the “Religiously Crazed Indians” and predicted that the dances were merely a prelude to an armed revolt. The racial-political tensions heightened by the dances—which the Lakota refused to cease, despite repeated requests from government agents—ultimately erupted in the infamous massacre at Wounded Knee, with a death toll of at least 200 men, women, and children.

“An Indian…reported that the hostiles at Wounded Knee were still carrying on their dances and that they had heard of the arrival of the military, but what is of much more importance to the agents is they have strapped on their guns and are dancing fully armed. They declare they will meet the soldiers and will not hesitate to go into battle with them. Reports relative to the Indians declaring their willingness to fight for their religious craze have come in frequently, but up to this time are simply rumors. This information comes direct however, from a source which Agent Royer pronounces trustworthy, the man who carried it being one of the agent’s carriers.”

Despite its perceived affiliation with violent native resistance, even at the time the Ghost Dance Movement was understood to be part of a long tradition of native millenarianism. After hearing the early accounts of the dance, United States ethnologist James Mooney asked for and was granted permission to conduct formal research into the origins and practice of the Ghost Dance among various tribes, including the Cheyenne, Comanche, Sioux, and Apache.

His account, published in 1896, includes material gathered from interviews with Wavoka and his followers, accounts of the dance by various observers, photographs of the dancers, and transcripts of the songs accompanying the dancing. Mooney also made recordings of several “Ghost Dance” songs, although these are believed to be his own performance and not from actual dancers. Mooney’s scholarly interest in the Ghost Dance Movement ensured that its positive, community-building and peaceful elements would not be forgotten.

All this is to be brought about by an overruling spiritual power that needs no assistance from human creatures; and though certain medicine-men were disposed to anticipate the Indian millennium by preaching resistance to the further encroachments of the whites, such teachings form no part of the true doctrine, and it was only where chronic dissatisfaction was aggravated by recent grievances, as among the Sioux, that the movement assumed a hostile expression. On the contrary, all believers were exhorted to make themselves worthy of the predicted happiness by discarding all things warlike and practicing honesty, peace, and good will, not only among themselves, but also toward the whites, so long as they were together. Some apostles have even thought that all race distinctions are to be obliterated, and that the whites are to participate with the Indians in the coming felicity; but it seems unquestionable that this is equally contrary to the doctrine as originally preached. 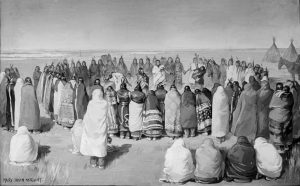 Mooney’s account and his photographs of the dancers inspired the artist Mary Wright to commemorate the ceremony in her work. Wright’s painting captures the intensity of the Ghost Dance as a locus of community engagement and its use as a symbolic shield of sorts, protecting the native community from the intrusive religious and culture practices of others. Note the way the circle of figures (both men and women) creates an island in the midst of the otherwise barren plain, and how the attention of all observers (including the viewer) is oriented towards the central dancer.

Taken on the day after the Lakota Sioux surrendered to United States forces following the Wounded Knee Massacre, this photograph shows  William “Buffalo Bill” Cody (center rear,  with the broad-brimmed hat) in the midst of an interracial group. Just below Cody, seated on the ground, is Kicking Bear, one of the leaders of the Ghost Dance among the Lakota Sioux. 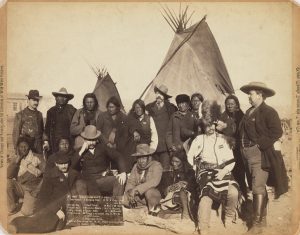 Cody had a long-standing relationship with the Lakota Sioux and a strong advocate of native rights to live and work off the reservation.  Several of his long-term performers had worked with the government to suppress the Ghost Dance revolt. As one of the peace negotiators, he offered former Ghost Dancers the opportunity to escape government intrusion in another way: by employment in his Wild West Show.

By the end of the nineteenth century, the Ghost Dance had become a symbol of lost causes, as seen in this cartoon lampooning repeatedly-failed presidential candidate William Jennings Bryan and his ‘free silver’ campaign.